After the Presi Traverse in all of it’s success and glory, my sweet, not-competitive-at-all Alex got the idea in his head to try doing a traverse of the Pemigewasset Wilderness (otherwise known as ‘The Pemi’).  The Pemi is located between 93 and Route 302 (which is where we ended up on the Presi Traverse).  The Pemi Wilderness is, like it’s name, quite wild.  If you are a 4000 footer peak bagger then you know of the elusive Owls Head that looms almost in the center of the wilderness.  There are many 4000 footers that are tough to bag in this part of the White’s.  So, for bragging rights and purely out of curiosity and the desire to suffer through another 12+ hour day of hiking, the Pemi Traverse idea was hatched and put into action.  The plan: camp at Lafayette campground.  Depart from campground, hike up to Greenleaf Hut over Lafayette, over to Garfield, across Garfield Ridge to Galehead hut, up South Twin, over to Zealand, Z Cliffs and Zealand Hut and out to the Highland center on 302.  For a grand total of 23 + miles.  No biggie, right?  We got a great group together for the trip: me, Alex, Jen, Mel and Dennis.  Strong crew with good humor and similar desires for suffering.  Cars were dropped, one for a bailout at Zealand Road and one at the Highland center (both loaded with beer for the finish).  The weather was a little iffy, with a 20% chance of showers in the afternoon, but there wasn’t a threat of thunderstorms so we were a go.  We were up at 4:30 AM, and had a much more successful morning rally than the presi traverse.  We were on the trail by 5:45AM.  The terrain on the Old Bridal path started out similarly to the Presi traverse, rugged, wet, wooded.  Soon we were rewarded with great views, just as the sun started peaking out above the mountains.  We had some pretty early AM spectacular views into the wilderness.  Very different from the Presi’s – very wooded, rugged and remote.  You could just barely make out the antennas on the top of Mount Washington in the very far distance.  Oh, I should mention the SCHEDULE!  Alex worked his butt off to keep us on track for this hike.  We realized that we really needed to keep moving on this hike after our experience in the Presi’s, so Alex put together a map, and broke down the hike into very doable sections with target times and distances – with the plan to hike 25% faster than book time.

We made it to Greenleaf Hut about a half hour earlier than the schedule.  We quickly departed after filling water and visiting the bathrooms, and set out for a first summit of the day – Lafayette.  We didn’t realize at the time, but this was most definitely the nicest section of trail summit that we would do for the remainder of the day.  Our spirits were high, being well- ahead of schedule, and set out for Mt. Garfield along the Garfield Ridge trail.  The terrain definitely worsened and became steep, wet and tricky.  We descended forever between Lafayette and Garfield, and our pace slowed with the more technical terrain.  I managed to twist my ankle – so that definitely made me pretty cautious!  We were still ahead of schedule on Garfield, but our pace had slowed. 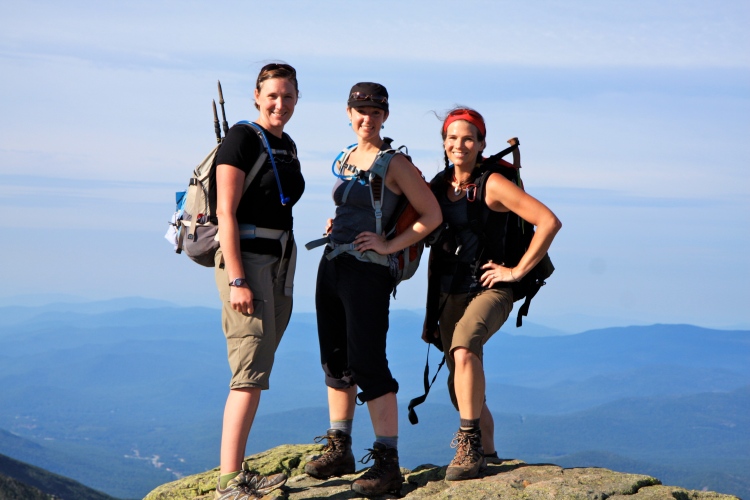 The next target: Galehead Hut.  The Garfield Ridge trail continued it’s relentless beauty – all of us either fell, slipped or twisted something on that trail.  But we made it to the hut only 20 minutes behind schedule.  The AMC crew said it was smooth sailing from there, so with high spirits and still feeling fresh, we set out to summit South Twin.  You could see the trail from the Garfield Ridge – and it literally goes straight up the mountain.  We were at our halfway point on the summit of South Twin, and definitely at the low point.  We all ate, enjoyed the views (some of the last for the day) and got ready for the 2nd half. So far the weather was holding – no rain, but the clouds had rolled in.  We were hoping the 2nd half of the Pemi traverse would be easier like it was on the presi traverse, but no luck there.  The terrain continued to be wet, steep and technical as we made our way to Guyot on the Twinway. 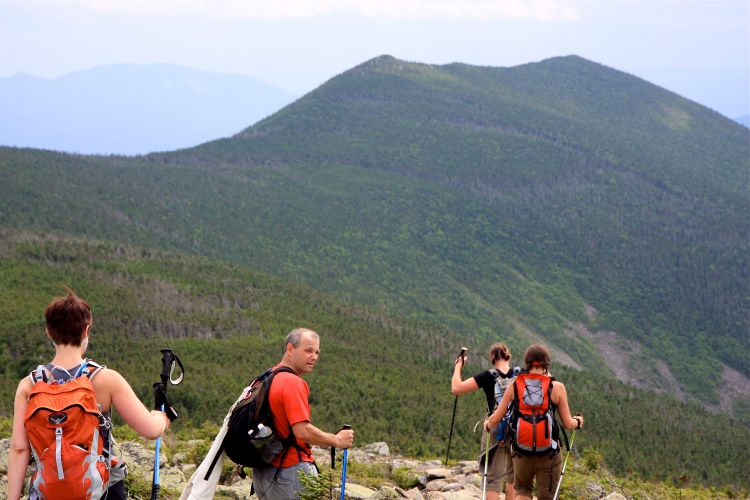 We did get some nice views on our way to Guyot, but because of those unusual views, we ended up setting off on the Bondcliff trail, so went a little out of our way, setting us back again (since we did manage to make up lost time on the traverse between South Twin and Guyot). Up and over Guyot, we set out for the viewless Mount Zealand.  For Alex and I, getting to that point felt like we were close because 2 winters ago, we had hiked from the Highland Center and on the AZ trail and stayed 2 nights at Zealand Hut, summiting Zealand during that time.  It felt like an obtainable goal at that point.  But we did remind ourselves that on that winter hike, we had a tough time finding the AZ trail due to what we thought at the time was the immense snow fall.  Later we found out otherwise… more on that.  Jen, Mel and Dennis hiked the extra .1 miles to the viewless Zealand summit to give it some love and check it off their list.  Alex and I didn’t feel like we needed to see that summit again, so we hung out and chatted with a couple of thru-hikers on the AT.  We were moving pretty fast – I think we were pretty much the fastest hikers out there, and were sticking to the schedule almost to a T.  It was nice to have mini goals for ourselves on this hike – in the Presi’s you were constantly rewarded with spectacular views and you could see where you were going above treeline, but that was not always the case on this hike, so the schedule really helped keep us motivated.  That and the cooler full of beer that at that point we were all drooling over and contemplating whether we just wanted to hike out to Zealand Road and bail or continue on the AZ trail.  From the summit of Zealand, it’s a steep and long descent to Zealand Hut, with the Z cliffs along the way.  We stopped and enjoyed the views and had another food break. 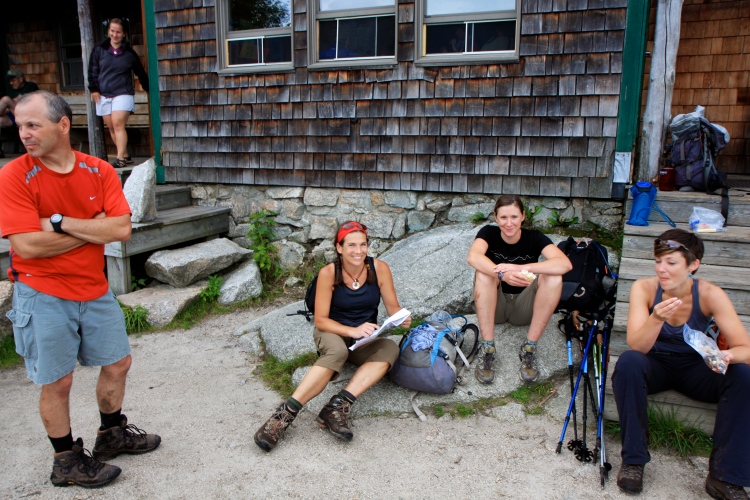 At the hut, we knew we had 5.5 miles left to go, mostly all on the AZ trail.  I have to say, it felt like we were done.  It’s like that feeling on a normal day hike when you realize you only have 1 mile to go out of 8.  With us, 5 miles out of 24 seems not too bad.  But the reality was – we still had about 1/5 of the hike to do in those 5 miles.  And the AZ trail was a mud fest.  It was moose territory, wet, muddy and low.  Beautiful woods, but the trail clearly wasn’t a popular choice and was overgrown and muddy.  It felt like forever to reach the Mt. Tom spur trail and at that point, we were ready to be done.  But we laughed up until and through the end of the hike.  Great company makes hiking, no matter the terrain, a blast.  We made it out by 7:30, only 20 minutes behind schedule.  The beer was still cold and everyone survived. 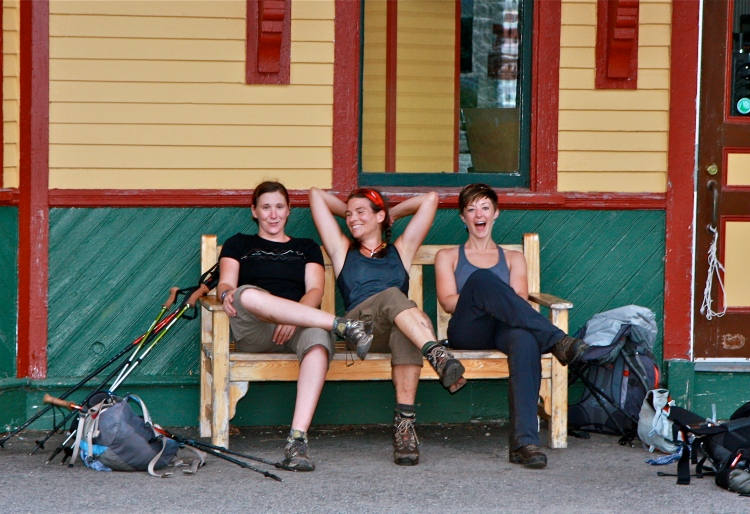 We even made it to dinner at Fabyan’s where we got our celebratory burger and beer.  And we even managed to have a fire at camp before the rain started and sent all of us packing in for the night.  We all woke up the next morning with legs like lead, but well worth it.  I don’t think we really need to do that hike again, but it was certainly a good day.

The basics: I love New England (my home), the outdoors, gardening, cooking, sewing, knitting, my kitties, my puppy, my partner in crime Alex and my sons Griffin & Orion, and my family and friends. I occasionally have time to share the things I love here. Enjoy! View more posts